When Oregon Gov. Kate Brown signed a bill on Tuesday requiring electricity providers to deliver 100 percent clean power to customers in the state by 2040 into law, Oregon officially became the eighth state in the nation to enact a 100 percent clean or renewable commitment ratified by its state legislature. It’s a huge victory for the Beaver State and will ensure a cleaner healthier future for all Oregonians. It’s also an important step in the broader national movement toward clean and renewable energy. So, as we celebrate, it’s also a perfect time to reflect on how we got here and where we’re heading next.

To start at the very beginning, let’s back up to the start of the century. In 2001, America got just one half of one percent of its electricity from wind, solar and geothermal renewable energy sources. Despite that paltry total, renewables were already beginning to grow, and the Department of Energy forecasted that these options would double in use by 2020. To jumpstart that growth, states, at the time, were beginning to establish specific targets to encourage renewable energy progress.

Environment America’s 2020 report Renewables on the Rise: A decade of progress toward a clean energy future includes an interactive data story (pictured above) depicting the rise of renewables following state commitments from 2001 to 2020.

For example, in 2002, California set its sights on reaching 20 percent renewable electricity by 2017. Dozens more followed suit in the coming years and, now, 31 have adopted renewable portfolio standards, or RPSs, that ensure renewables make up some minimum percent of electricity generated or used in a given state. 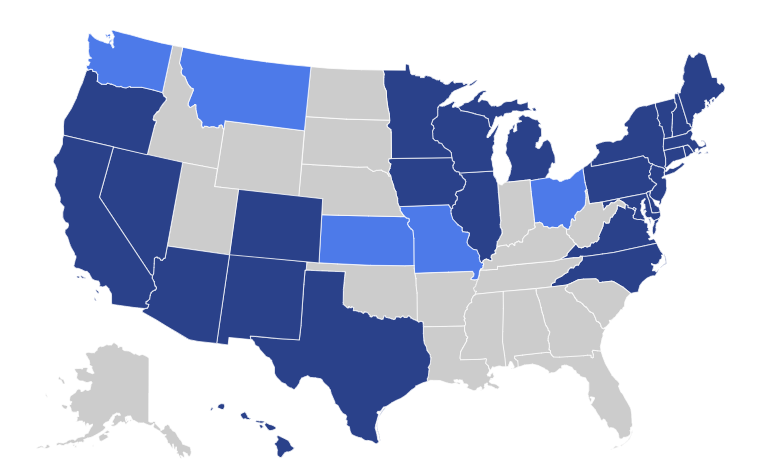 To date, 31 states (in two shades of blue) have adopted renewable portfolio standards. Many (in dark blue) have increased those standards over time.

Over the years, the majority of states with renewable standards have actually increased their ambitions over time, as they’ve seen renewables consistently beat all expectations. And in the 2010s, an even bolder idea started to take hold: What if we didn’t just use more renewable resources, but we could actually rely entirely on them to power our lives?

In 2015, Hawaii became the first U.S. state to put that vision of 100 percent renewable power into action, enacting a statewide commitment to do so by 2045. California then passed Senate Bill 100 (SB100) into law in 2018, similarly signing up to transition to 100 percent clean, zero-carbon electricity by 2045. California’s landmark commitment, won after Environment California led a broad coalition of more than 250 organizations that built a groundswell of public support, acted as a spark that led to action from coast to coast.

Once the most populous U.S. state and world’s fifth largest economy was on board, a trend quickly took off. New Mexico was next to pass a 100 percent clean target in 2019, followed within months by Washington, New York and Maine. Each of these victories were thanks to not only ambitious elected leaders, but also to the hard work of advocates and organizers such as those at Environment New Mexico, Environment Washington and Environment Maine who mobilized broad public support to secure a clean energy future for their states. And, as that crucial work has continued and expanded in the years since, so has the list of states getting on the road to 100 percent. Virginia became the seventh state, and first in the Southeast, to join the group in 2020, and Oregon now makes eight.

And those commitments aren’t just words on paper. They are also leading to real, tangible progress here and now. Today, more than 10 percent of America’s electricity comes from the wind, the sun and the earth. And we owe a large part of that progress to the very leadership states have delivered from coast to coast.

So, where do we go from here?

The transition to clean and renewable energy can’t stop with Oregon — or with any of the commitments states have already made. In order to continue accelerating the pace of the clean energy transition, we must both expand the network of communities that are working toward a clean energy future and ensure that those communities back up their promises with the concrete actions necessary to achieve the targets they set.

On the first front, Environment America and our national network of state organizations will continue to prioritize state and local commitments to 100 percent renewable energy. States, cities and leading institutions are the places where we can make the most immediate progress. These victories also spur momentum for further nationwide action that will bring clean energy to every American.

On the second front, we are also winning policies to help advance each of the technologies that will enable a 100 percent renewable energy future. These range from solar and wind power, to batteries that allow us to store renewable energy for when we need it most and efficiency measures that lower our overall energy needs. From tax incentives for clean energy technologies to policies putting solar on all new homes, each small step contributes to a virtuous cycle that starts with concrete goals — like those just enacted in Oregon — that accelerate the pace of progress and, eventually, lead to even more ambitious plans as the initial commitments are met.

You can add your voice to this movement today by joining our One Million for 100 Percent Renewable Energy project and calling on your state, city or town to be the next to go 100 percent and kickstart its own virtuous cycle.