Dell, which produces about a quarter of U.S. laptop and desktop computers, outlined how it will support repair, including empowering customers to “drive their own circular evolution,” and cut waste. The company wrote:

Repair is essential to keep products in use longer and out of landfills. The growing conversation around repair with our internal and external stakeholders is an important one and an opportunity to evolve Dell’s leadership, providing additional routes to make repair more accessible and affordable … whether that’s by a Dell technician or by the customer.

Dell’s commitment to repair done both within and outside of its direct control is commendable (and part of the reason I use a Dell). But the company still seems reluctant to advance the broader Right to Repair conversation forward, or distance itself from anti-Right to Repair efforts.

Dell a leader among major brands

Earlier this month, U.S. PIRG Education Fund released a scorecard grading the top laptop and cell phone manufacturers on how repair-friendly they are. Grades were based upon both the repairability of their products and their approach to the Right to Repair.

Dell earned the highest score for its products. Of the seven laptop brands we scored, it edged out Asus for the top rank, with a 7.81 for a “B+” in our scoring system. 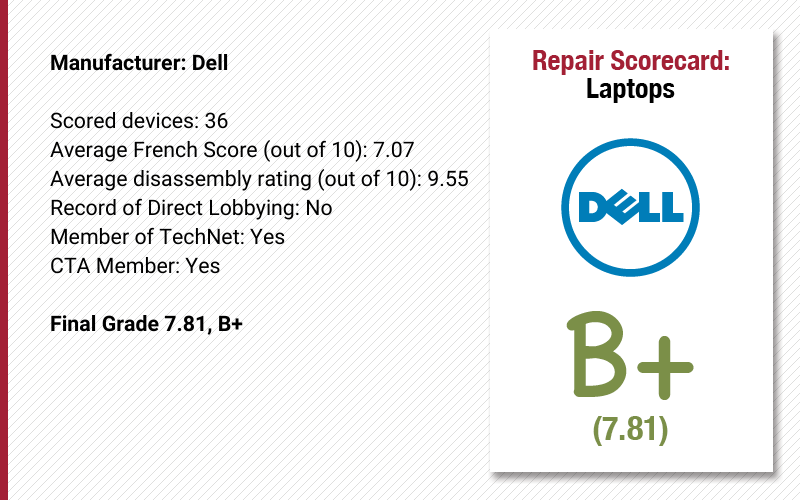 Given its size, clout and reputation, Dell could be a leader in supporting changes that would make a large impact outside of just its products.

For now, Dell is content to keep improving repair choices for its customers, but questions remain about the company’s affiliation with anti-Right to Repair trade associations.

Dell lost points because of its affiliation with trade associations that publicly oppose repair-friendly legislation, including TechNet and CTA (Consumer Technology Association). Dell’s support for those organizations prevented it from getting an “A” in our scorecard. We deducted a .25 points for any company with membership in (i.e. providing financial support for) either of those two trade associations.

“We believe that remaining actively engaged in the Right to Repair conversation is critical for technology companies, from both a reputational and a regulatory perspective,” said Green Century shareholder advocate Annalisa Tarizzo in a statement. “… Even industry leaders have room for improvement. We urge Dell to distance itself from trade groups whose lobbying activities run counter to its position on product repair.”

Dell vs. its biggest competitors

Some of Dell’s biggest competitors often attract negative attention for restricting repair and for the highly visible way they lobby against pro-repair reforms. Apple* and Alphabet* (Google’s parent company), have also been targeted by shareholder resolutions filed by Green Century.

Meanwhile, as far as we can tell, Dell wouldn’t change much of its approach if Right to Repair were to pass, while most competitors would be playing catch up. In other words, Dell has a major leg up in a world in which Right to Repair is the law. Other manufacturers would be scrambling to provide access to parts and repair tools the same way Dell is already doing.

The fact of the matter is that the world has a very big electronics obsolescence problem: Electronic waste is the fastest growing waste stream both in the U.S. and the world. We both need the laggards to catch up, and the leaders to raise the bar.

You should carefully consider the Fund’s investment objectives, risks, charges, and expenses before investing. To obtain a Prospectus that contains this and other information about the Funds please visit www.greencentury.com, email [email protected], or call 1-800-934-7336. Please read the Prospectus carefully before investing.

Stocks will fluctuate in response to factors that may affect a single company, industry, sector, country, region or the market as a whole and may perform worse than the market. Foreign securities are subject to additional risks such as currency fluctuations, regional economic and political conditions, differences in accounting methods, and other unique risks compared to investing in securities of U.S. issuers. Bonds are subject to a variety of risks including interest rate, credit, and inflation risk.