Every year, millions of Americans have their cars towed.

In some cases, the vehicle was parked improperly, the driver tracks it down and pays the bill without incident. Other times, the vehicle owner may face an array of unfair circumstances. Predatory practices following an initial tow can range from charging exorbitant fees to refusing the owner access to the personal items in their car during business hours. In still other cases, the driver’s vehicle wasn’t really parked improperly and was towed illegally.

Under the best circumstances, getting towed is an ordeal, even when justified. For many drivers, however, the situation is compounded because consumer towing protections in most states are weak, nebulous or non-existent.

U.S. PIRG Education Fund identified 14 common-sense towing protections that should be available to consumers in every state, and researched which states offer those safeguards. These protections range from who is responsible for damages caused by careless towing to whether you are guaranteed the option to pay by credit card. You can find out which states offer which protections using our “search by state” tool below.

Our research points to two broad issues facing consumers. Firstly, an alarmingly high number of states have no protections spelled out on issues such as whether a consumer is entitled to an itemized bill, or a reimbursement if their car is damaged. In addition, too many states have inadequate protections, or the laws on the books are vague or overwrought and inaccessible to the average consumer. This needs to change.

Click through the slideshow below to see the summary of how many U.S. states offer which protections to consumers.

A closer look at key protections 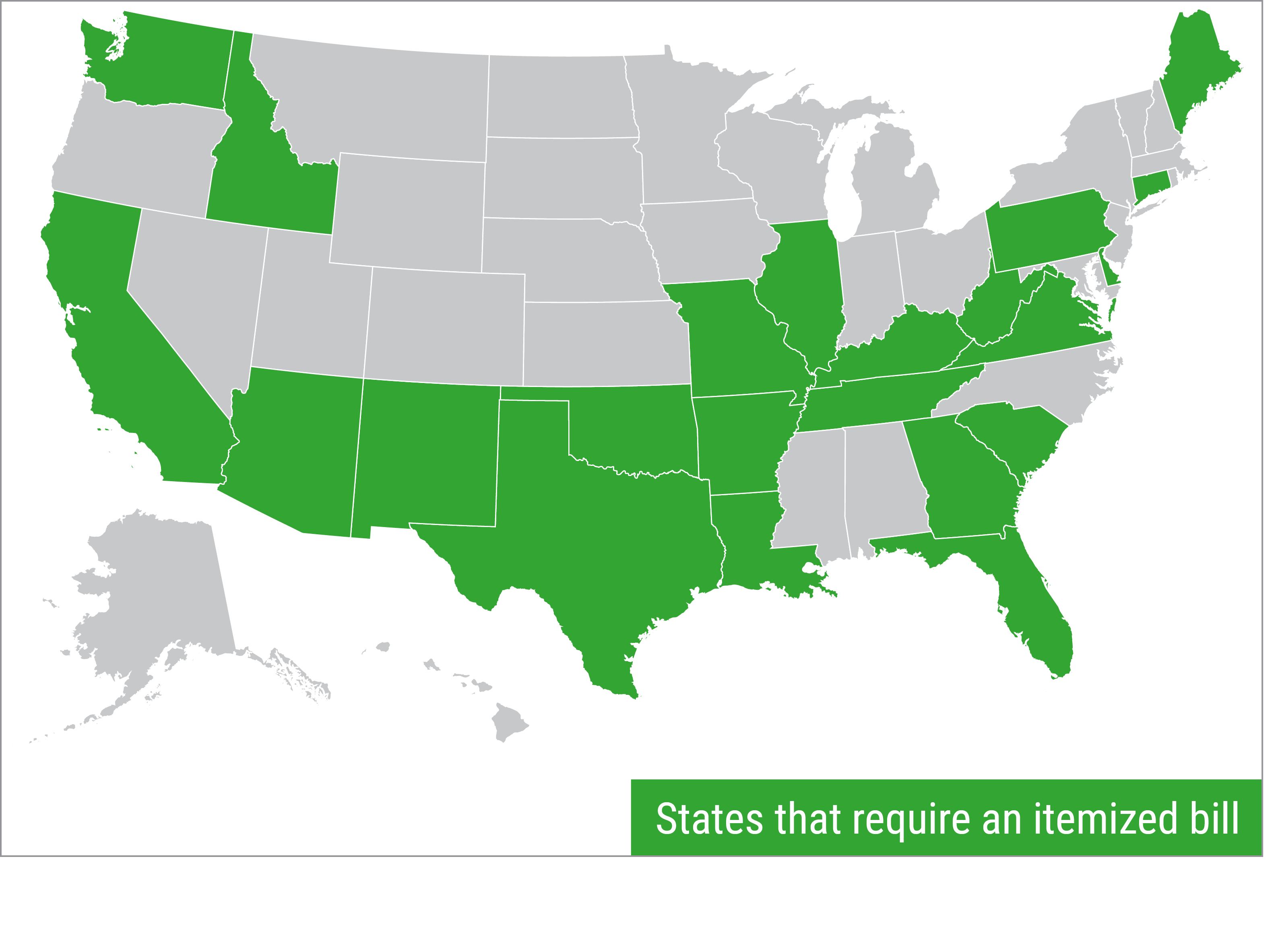 When a vehicle is towed, one of the primary concerns is cost. Unfortunately, most states do not have maximum towing and storage rates, and many fail to define clearly the definition of “reasonable rates” that towing companies must adhere to. The difficult part in those cases is discerning who sets the maximum rate and how to calculate it.

In some states, the allowable charges are simply set at a dollar amount per day or an overall maximum ceiling charge. Other states set maximum fees annually based on a variety of factors, and some have no fee limits whatsoever. If the rates are set each year by a towing advisory board or other group, consumers should reach out to their local law enforcement to confirm what rates they should expect to pay.

Without knowing what a state’s maximum rates are, it’s nearly impossible for consumers to determine whether they’ve been charged fairly. Even the small fees can add up. In 22 states, towing companies must provide the vehicle owner with an itemized bill. Consumers should review that receipt carefully and question any suspicious charges that don’t comply with the state’s laws. Losing a car through an illegal or legal tow can leave the owner stranded without another transportation option. Unfortunately, the vehicle may not be the only important possession lost in the process. Nobody expects to have their car towed, which means that a variety of items, both essential and nonessential, may be inaccessible in a locked storage yard. Whether someone left their bag, medication, wallet, phone or another item in the towed car, the options to get those back vary by state.

In 20 states, the towing storage facility must allow you to access all personal items from your towed vehicle. An additional nine states allow the retrieval of emergency items only. If consumers live in one of these states and the towing company insists they must pay the full fee for the release of their car before accessing their items, that is illegal and predatory behavior. Many of the protections outlined in this report come into play after a vehicle is already sitting in an impound lot. But what happens when a car owner returns before the car has left the parking space?

Tow truck drivers in 18 states must release a car at no charge or for a smaller “drop fee” if the owner returns before it has been completely removed from the property. In these states, if the tow truck operator refuses to release the vehicle, this could be predatory and illegal behavior.

If you suspect your car has been towed illegally, but you’re not sure what actions to take, check out the full list of towing protections your state offers. Just as important, if you live in a state with very few towing protections, you should make your voice heard by contacting the offices of your governor and local elected leaders. Finally, to make the most of this information, here are the steps to take after your car has been towed.

An illegal tow and any predatory practices that follow can place significant financial burden onto consumers. The problem here is two-fold: The absence of protections leaves consumers vulnerable, while unclear or nonexistent laws further complicate the process, even if the tow is legal.

States must prioritize stronger towing laws
Several states have tried to pass stronger protections that safeguard consumers and their belongings when a car is towed. Some are still in the works, and others never made it to the finish line. In South Carolina, for example, a bill introduced in March 2020 would halt a towing company’s ability to charge storage fees until the vehicle owner has been notified. This bill would amend the original code from 1976. The bill remains in committee.

A 2019 Mississippi bill, which died in committee, would have amended code from 1972. Drivers whose cars are towed have virtually no protections now under any state laws.

While many cities have taken it upon themselves to update and strengthen towing laws, states need to step up as well.

Require displayed rates and itemized bills
Only half of states specifically require itemized towing bills. Even if a state does have explicit maximum towing and storage rates, those limits might not be readily available to someone retrieving their car from an impound lot. Without a required, itemized list of all towing, storage and other charges, a company could charge a lump sum with any number of extra fees tacked on.

An ideal standard would require state maximum rates, a clear display of those rates at the storage facility and an itemized bill reflecting those rates, provided to vehicle owners at the time they retrieve their car. Not only would this increase accountability between towing companies and consumers, but the overhead of providing this service is next to nothing for all companies that are already charging fair and reasonable prices.

Unlimited access to all items in towed vehicles
After a car is towed, the loss of transportation presents huge roadblocks for the car owner. These obstacles should not be compounded by the loss of essential items in the vehicle as well. The bill for retrieving a towed vehicle may be steep or altogether out of the owners’ budget, and while the vehicle remains locked up, all the personal items inside shouldn’t be. In any case where a consumer cannot immediately pay the charges to retrieve their car, they should be able to access all personal belongings inside that vehicle, free of charge during normal business hours. This includes their phone, keys, wallet, medications, personal documents and any other item that they consider important to redeem.

Call on your governor to protect consumers

Call on your governor to protect consumers

For more than 40 years, U.S. PIRG Education Fund has alerted the public to risks to their health, safety and financial security. And, we empower people to avoid these dangers and protect themselves. Below are some of our most frequently requested resources and new we’re adding new ones regularly.